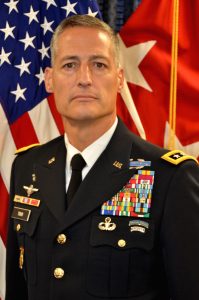 Lieutenant General Ken Tovo culminated his 35-year military career in 2018, serving as the commander of the US Army Special Operations Command (USASOC). He was responsible for manning, training, equipping, and providing strategic direction to all the Army’s Special Operations forces (Green Berets, Rangers, Special Ops Aviation, Civil Affairs, and Psychological Operations), a combined organization of over 34,000 people.

He began his service in the Infantry upon graduation from the US Military Academy in 1983. After serving his initial tour with the 82nd Airborne Division, Tovo completed the Special Forces Qualification Course and transferred to the Special Forces branch. He served as a Special Forces detachment, company, battalion, and group commander in the 10th Special Forces Group (Airborne).

He is the President & CEO of DOL Enterprises, Inc., a consulting firm focused on providing advice on strategic planning, risk management, and organizational effectiveness and serves on the board of several companies.

Ken and his wife, Suzanne, have been married for 34 years. They raised two sons who both serve the Nation – one as a Special Forces officer and the other as a high school English teacher.