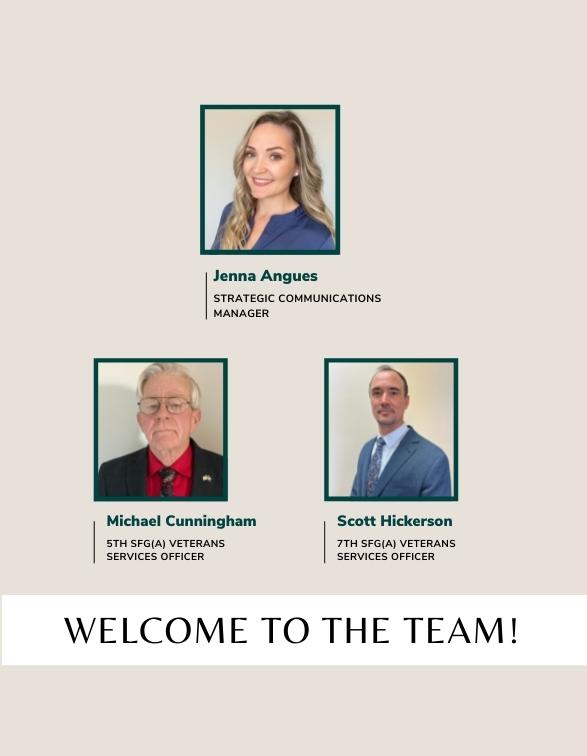 Jenna Angues is originally from North Carolina but now lives in Florida with her husband and two children. Jenna enjoys weight lifting and outdoor activities with her family. She graduated from the University of North Carolina at Greensboro with a Bachelor’s Degree in Business Administration. She continued her education at Appalachian State University where she obtained her Master’s Degree in Educational Media with a concentration in New Media Literacies and Global Perspectives.

Jenna’s professional experience consists of working with the Charlotte Hornets as a Marketing Intern, Sony Music Entertainment as a Marketing Representative, and Beasley Media Group as a Promotions Director and Digital Content Manager.

As a daughter, sister-in-law, and wife of Green Beret soldiers, Jenna’s understanding of the Special Forces community is profound. Jenna’s commitment to the Green Beret Foundation is influenced by her relationship with the community driving her to achieve excellence in her job.

Mike is a retired Green Beret with over 30 years of service in the U.S. Army including 24 years assigned to the 5th Special Forces Group. During his career, he served during combat operations in the Gulf War, Somalia, Afghanistan, and multiple rotations to Iraq as well as operations throughout the Middle East and Africa.  Mike brings a wide skill set from assignments as a Special Forces Medical Sergeant, Operations and Intelligence Sergeant, Detachment Operations Sergeant, Company Sergeant Major, Battalion Operations Sergeant Major, and Battalion Command Sergeant Major. His final assignment was the Deputy Group Command Sergeant Major of the 5th SFG (A) until his retirement in 2012.

After retirement Mike continued to give back to the nation as an Elementary and substitute school teacher. He is also committed to helping the Soldiers, Veterans and families of the 5th SFG (A) having served as the President and Secretary of Chapter 38 Special Forces Association. Mike and his wife Jennifer live in Woodlawn, TN and enjoy the outdoors, music, and their four grandkids.

Scott Hickerson is a former Green Beret with over 25 years of military service, 23 years spent in Special Operations units. Having spent the first portion of his career in the 75th Ranger Regiment, followed by 13 years as a Green Beret—a role as Veterans Services Officer (VSO) with the Green Beret Foundation feels like a natural progression to him.

“During my time in the Ranger Regiment,” Scott says, “I was involved in a lot of high energy, highly kinetic nighttime raids. When it came to the point in my career where they wanted me to move into a leadership role, I wanted to keep flying on those helos every night, and I didn’t believe I could be as much of an asset in the office at that time.”

Moving from the Ranger Regiment to Special Forces kept things busy and kept me in the direct fight. “Every generation of warriors wants to be tested and wants their war; when the GWOT fell upon our shoulders, it was our generation’s defining moment. We were called upon to dig deep and decide who we were going to be.” As a Green Beret, Scott served as Special Forces Weapons Sergeant (18B), Intelligence Sergeant (18F), and Operations Sergeant (18Z) at 7th SFG; he also served as a First Sergeant for over 20 months at the Special Warfare Medical Group (Airborne), served 36 months of SF ODA Team Sergeant time, and has 10+ years of JTAC experience.

With 80+ months of combat experience under his belt, mentorship of younger Green Berets coming up through the ranks was the next evolution of Scott’s career.  “I didn’t want them to have to learn lessons the hard way, as I had. Maybe there were ways of keeping people healthier longer, so that we could keep them in the fight. I embraced a more mentor-like role in the last 6 or 7 years before retiring,” he says.

Post-transition, his desire to demystify the process for other Green Berets has only intensified. “The transition process is daunting, if for no other reason than all of the unknowns,” he says. “You don’t want to let your family down; you’re scared of taking a financial hit by getting out of the military. The VA process is another huge unknown, and there’s potential there for people to just walk away from it for fear of not getting what they deserve.”

Scott likens his new role as VSO to that of the lead swimmer in a river crossing at night: “We send a lead swimmer party over to check the other side, and to tie off a rope for the crossing. I like to think of a Veteran Services Officer as one of those lead swimmers on the team with the rope, and the retirement process as that river at night. The guys on the other side don’t even know how wide the river is or how fast the water is moving, so if I can come back and help ease that process for them, it’s worth it.”

About the Green Beret Foundation

The Green Beret Foundation (GBF) provides U.S. Army Special Forces Soldiers and their families with emergency, immediate, and ongoing support. Since its inception in October 2009, GBF provides programs and services in support of the Special Forces Regiment on a daily basis. Since its inception, GBF has invested 84%, or 84 cents of every dollar, into its programs and services, which has totaled over $16 million that has directly supported the Regiment and its families. GBF is the only nonprofit solely dedicated to supporting Green Berets and their families that has achieved a 4-Star Rating with Charity Navigator. Also, GBF is the sole special operations nonprofit that is accredited by the Department of Veterans Affairs for the purpose of preparing, filing, and appealing of disability claims and benefits.