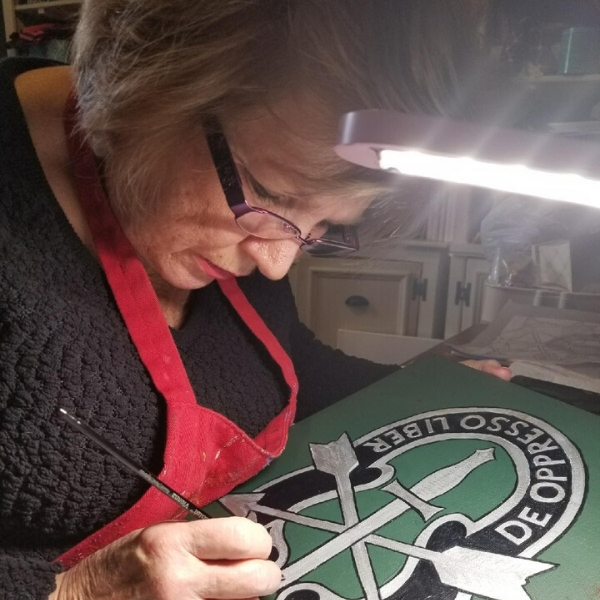 When Penny Miller, the artist behind Pineland Trading Post, crafted her first “Brave Mamas Raise Brave Children” plaque, she didn’t realize how popular her design would become. The words hand-painted on a custom canvas with the Green Beret logo beneath them, it became an instant favorite among the Green Beret husbands who make up her primary clientele.

“The guys like to do something for their wives,” Penny says. “They know that when they’re gone, their wives are carrying the load and taking care of everything so that they can concentrate on work. These women are brave to take on all this, like we talk about in the Steel Mags; they’re strong, and they produce strong children who are likewise brave to go through what they do.”

Herself the mother of an active duty Green Beret, the eldest of the three sons that she raised on her own as a single parent making ends meet as a piano teacher, she is acutely aware of the fact that challenging circumstances build good character. “My son Andy, at age 11, had to do things to help the family that most kids his age never have to. Getting things done around the house. Being a role model for his brothers. There are so many stories of little things he did that just amazed me.”

“That’s probably why he became a Green Beret;” she reflects. “Most Green Berets don’t come from a cushy background; they all have that inner strength.”

It was at her son Andy’s urging that she began crafting the customized Green Beret themed artwork that she now sells through her Etsy shop, Pineland Trading Post. At first, her creations were simply for her son to enjoy; demand for her work grew organically when his friends and teammates saw what she had created. “I painted him three Pineland flags, then SF wings. When his friends saw them, they wanted them, too; he came back to me and said, ‘Mom, I think you’re in business!’”

Since then, as business has grown, Penny has turned her efforts towards giving back, donating numerous works to Green Beret Foundation (GBF) fundraising events, and donating a portion of the proceeds from her sales to the foundation. “I am also just thrilled to share that they have a few of my items hanging on their wall down at the GBF office in Texas,” says the St. Louis native.

As the mother of a Green Beret, she credits the GBF with providing her with the added assurance that if the worst should ever take place, she would be able to get to his side. “I’m 70 years old; I was born in 1950. When Andy was a Junior in high school, and he told me he wanted to join the Army, I just gasped. It’s the history that makes you gasp. I lost a LOT of friends in Vietnam, and that was me being a product of my generation.” Andy persisted, certain that the Army was in his future, and Penny relented, signing off for him to join at age 17. He stayed in the reserves until 9/11 prompted him to go active duty.

“The hardest thing for me—and I’m sure that this is also the case for other wives and mothers—is that if something should happen to him on deployment, you can’t always just go right to where he is. And as a mom, that is the first thing I would want to do—go be by his side,” she says. It is something that is never far from her thoughts, but there is one thing that gives her a modicum of reassurance. “It’s a sense of security knowing that the GBF would help me get to his side in a situation like that,” reflects Penny. “If my son were to be hurt, and I said to the GBF, ‘I need to go there,’ they would be there for me. I have absolutely no doubt.”

Also a member of the Nomad Chapter of the Steel Mags, Penny is proud to be a part of that contingent of strong women making things happen in the Special Forces community. “The women of Steel Mags are just as strong as their husbands,” she says. “They make up their minds, and they do it. I’m so proud of so many of those young ladies who have opened their own businesses and kept themselves going. They’re doing an amazing job.”